By 2,500 BCE the Indus-Sarasvati or Harappan civilization became the largest civilization of the Ancient world, extending over more than 386,000 square miles (1 million square kilometers) across the plains of the Indus River from the Arabian Sea to the Ganges. In its mature (Integration) phase with an estimated population of over five million people, it was larger than either Egypt or Mesopotamia. 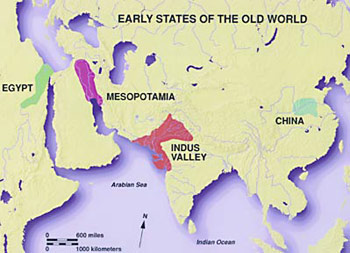 Civilizations of the Ancient World.

About 50 million years ago the vast tectonic plate we now know as the subcontinent of India crashed into Asia and produced the world’s largest mountain range, the Himalayas – “the abode of snow” in Sanskrit – which separates the Tibetan Plateau from the Indian subcontinent. The Hindu Kush Himalayan (HKH) region extends 3,500 km over all or part of eight countries from Afghanistan in the west to Myanmar in the east, affecting air and water circulation systems, and impacting the weather conditions in the region. Today it is the source of ten large Asian river systems – the Amu Darya, Indus, Ganges, Brahmaputra (Yarlung Tsangpo), Irrawaddy, Salween (Nu), Mekong (Lancang), Yangtse (Jinsha), Yellow River (Huanghe), and Tarim (Dayan). Drawing warm air from the south, which cooled and precipitated as torrential rainfall, the Himalayas created the monsoons and a fertile area in the Northwest that may well be “the land of seven rivers” described in the Vedas.

Between 7000 and 5000 BCE, pastoral camps and the first village farming communities settled into this fertile region. Over millennia these communities developed and interacted with others, sharing skills and technologies such as pottery, metallurgy, town planning and farming. Hence, by 2500 BCE the region became the largest, if not the greatest civilization of the Ancient world, expanding over one million square kilometers in its mature (Integration) phase with an estimated population of five million people.

Iran, Central Asia and the Indian subcontinent had engaged in seasonal migration and trade for hundreds of years, so the people of the Indus-Sarasvati Civilization already had long-standing connections with regions to their West. They also established links with Gulf Coast cultures reaching all the way to southern Mesopotamia and, via intermediaries such as Bahrain’s Dilmun traders, far beyond. They exported gold, copper, timber, ivory and cotton to Mesopotamia and imported bronze, tin, silver, lapis lazuli, and soapstone. To maintain such an extensive trade network they must have possessed advanced skills in ship building, sailing and overland transportation.

“For navigation, compasses carved out of conch shells appear to have been used to measure angles between stars. A voyage from Lothal to Mesopotamia to sell the prized Harappan carnelian beads, which the kings and queens of Ur were so fond of, meant at least 2,500 kilometres of seafaring; of course there would have been halts along the shore on the way, but still, 4,500 years ago this must have ranked among the best sailing abilities,” says Michel Danino, IIT-Madras.

Indus-Sarasvati Civilization artifacts such as seals, beads and pottery have been found in Mesopotamia, Oman and Bahrain, indicating trade with distant regions across both land and ocean. Pack animals and carts were used as well as ocean going ships. Smaller trading outposts are found far away from the center of their civilization like the one found at Shortugai in Afghanistan. The recently discovered Jiroft site on the Iranian plateau lies along the path of this trade network and here archeologists have found lapis lazuli (from Afghanistan or western Baluchistan) and carnelian (likely from the Indus Valley) along with artifacts from other regions.

Archaeology has its roots in European imperialism, which has historically meant that certain regions such as Mesopotamia and Egypt have been emphasized over others. Scholars such as Professor Gregory L. Possehl, author of Harappan Civilization, estimate that less than two percent of a probable 2,600 sites have been excavated across India, Pakistan and Afghanistan and more may still be found.

It is often referred to as the “Harappan” civilization from Harappa, the first discovered site.

Findings in the Indus-Sarasvati region date from as early as 7000 BCE up to 300 BCE. Most sites appear to be small villages and towns, but others, for example the site of Ganweriwala in the Cholistan region of Pakistan is estimated to cover 80 hectares (197.68 acres), and Rakhigarhi located west of New Delhi is thought to exceed 225 hectares (555.987 acres), making it the largest site discovered to date in India and second largest in the subcontinent, after Mohenjo-Daro which covers 250 hectares (620 acres) in Pakistan. Although threatened by urban development and mismanagement, it is hoped that significant breakthroughs in understanding of the Indus-Sarasvati Civilization will come to light in the near future as new sites are unearthed using modern archaeological techniques and DNA research.

Among the Most Advanced Civilizations Traditionally, early civilizations have been ranked in order of importance according to degrees of sophistication in the development and usage of script, agriculture, urbanization, architecture and trade. By all these measures the Indus-Sarasvati Civilization must be ranked as among the most advanced. This mercantile civilization had many progressive features like drainage, sewers and baths. They invented a system of measurement, which may be the first example of a decimal system. Town planning made use of geometry. Their weights, used in trade, show a geometrical progression with regular increases in ratios.

By all these measures the Indus-Sarasvati Civilization must be ranked as among the most advanced.

An ivory scale discovered at Lothal is engraved with close to thirty divisions regularly spaced every 1.704 mm. The Indian archaeologist Dr. Shikaripura Ranganatha Rao states in Dawn and Devolution of the Indus Civilization: “It is the smallest division ever recorded on a scale of the Bronze Age. The width of the wall of the Lothal dock is 1.78 m [i.e. 1,000 such divisions … and] the length of the east-west wall of the dock is twenty times its width. Obviously the Harappan engineers followed the decimal division of measurement for all practical purposes…” A collection of Indus-Sarasvati seals. Over 3,000 have been found to date and seem to have served various purposes: some commercial, to identify consignments and ownership, and some possibly used for ritual purposes to invoke deities, perhaps to safeguard items. Indus seals have been found at Mesopotamian archeological sites as well.
Since the Indus script has as yet not been deciphered there is a lot we don’t know about the structure of society in villages or towns, or across the greater civilization. We don’t know if there was a central government, a ruler or standing army, but indications are that there were not. It may have been a loose confederation of merchant cities; cities that sprang up as a result of unique, favorable environmental conditions that initially led to agricultural surpluses and subsequently to productivity surfeits, trade and specialization.
Ideas That Shaped Our Modern World
Mehrgarh 7000–2000 BCE