New Revelations of the Americas Before Columbus

Imagine you’re on an airplane journey in the early eleventh century. It takes off from eastern Bolivia in South America and flies over the rest of the Western Hemisphere. What would you see from the windows?

Only fifty years ago, most historians would have predicted two continents of wilderness with scattered bands of people who were working their way toward civilization. This is wrong: new information seriously challenges accounts of the numbers of Indians and the length of time they had been living in the Western Hemisphere when Columbus arrived. Consider one example. On the border with Brazil there is a nearly flat Bolivian province called the Beni, the size of Illinois and Indiana together. Scattered across the landscape are numberless island-like earthen mounds topped by forests and bridged by raised berms up to three miles long. Each mound is stabilized by broken pottery that is mixed into its earthen construction and rises as much as sixty feet above the flood plain, allowing trees to grow that cannot live in water.

Thirty years ago, the understanding was that Indians lived there in isolated groups and had so little impact on their environment that after millennia the continents remained mostly wilderness. Clark Erickson, an archaeologist, says this picture is mistaken in every respect: the landscape of the Beni was constructed by a populous, technologically advanced Indian society more than a thousand years ago. Much of the savannah of the Beni is natural, but there is evidence that the Indians trapped fish in the seasonally flooded grasslands by fashioning fish-corralling fences among the causeways. The grasslands were maintained and expanded by regularly setting fire to large parts of them, which is still done today to maintain the savannah for cattle. The Beni was a very important center of a pre-Columbian civilization known as the hydraulic culture of Las Lomas (the hills), a culture that constructed over 20,000 man-made artificial hills, all interconnected by thousands of square kilometers of aqueducts, channels, embankments, artificial lakes and lagoons as well as terraces.

The Siriono are the best known of a number of Native American groups in the Beni today. Between 1940 and 1942 a young doctoral student in anthropology named Allan R. Holmberg lived among them, and published an account in 1950 of his experience in Nomads of the Long Bow. Holmberg reported that the Siriono lived with want and hunger and could neither count nor make fire and seemed to practice no religion except for an uncrystallized conception of the universe. He saw them as primitive humankind living in a raw state of nature that for millennia had existed almost without change. Quickly recognized as a classic, the book provided an enduring image of South American Indians to the outside world.

Researchers, in the 1990s, learned that the Siriono were indeed a desperately impoverished people but for different reasons. They had arrived in the Beni as late as the seventeenth century, and their population had been at least three thousand. By the time Holmberg encountered them, less than 150 people had survived the smallpox and influenza that had destroyed their villages in the 1920s. As the epidemics hit them they were also fighting the white cattle ranchers who were taking over the region, and the Bolivian government aided the ranchers by hunting down the Siriono. The wandering people that Holmberg had traveled with in the forest were actually the persecuted survivors.

Missionaries and conquistadors brought the idea back to Spain and Europe that Native Americans lived passively with little to no effect on their environment. Over time various forms of this stereotype were embraced both by those who hated Indians and those who admired them.

It was only when new tools and disciplines, such as demography, climatology, carbon-14 dating and ice-core sampling, satellite photography, soil assays, and genetic microsatellite analysis were employed that the idea that the indigenous occupants of one-third of the earth’s surface had changed their environment so little over thousands of years began to look implausible.

And our misunderstanding of Bolivia is but one part of our mistake about what America was like in 1492. After Columbus sailed into the Western Hemisphere and traders and colonists soon followed, a phenomenon called ecological release occurred. Throughout the hemisphere ecosystems faltered. Colonists in Jamestown complained about the scourge of rats they had accidentally imported. Tame European clover and blue grass transformed themselves and swept through areas so quickly that the first English colonists in Kentucky found both species waiting for them. And peaches in the southeast that previously had not grown in the wild proliferated so much that eighteenth-century farmers feared the Carolinas would become a wilderness of peach trees!

South America was hit especially hard. Spinach and endive, escaping from colonial gardens, grew into impassable, six-foot thickets on the Peruvian coast, and mint took over the valleys higher up in the Andes. In the pampas of Argentina and Uruguay, the voyager Charles Darwin saw hundreds of square miles choked by feral artichoke and found that peach wood had become the main supply of firewood in Buenos Aires. Some invasions canceled each other out, for example, the plague of endive in Peru may have been checked by a simultaneous plague of rats that overran the land and destroyed crops. Maize was farmed for thousands of years in irrigated and carefully regulated terraces.

Until Columbus, Indians were a keystone species in most of the hemisphere. They annually burned undergrowth, cleared and replanted forests, built canals and raised fields, hunted bison and netted salmon, and grew maize and manioc. Native Americans had been managing their environments for thousands of years. By and large, they modified their landscapes in stable and intelligent ways.

Some areas of maize have been farmed for thousands of years. In Peru, for instance, where irrigated terraces of crops covered huge areas, wholesale transformations were carried out in an exceptional way. All of these efforts required close and continual oversight, but in the sixteenth century, epidemics removed the checks and balances. After 1492 American landscapes were emptied of Native Americans, which deregulated the ecosystems. The forests that the first New England colonists thought were primeval and enduring were actually in the midst of violent change and demographic collapse. Archeologists think there were not large numbers of passenger pigeons before Columbus.
In 1823 the artist and naturalist, John Audubon saw a flock of passenger pigeons passing overhead in a single cloud for three whole days, obscuring the light of noon-day as if by an eclipse. In Audubon’s day one out of every four birds was a passenger pigeon. And suddenly, the passenger pigeon vanished with the last bird dying in September 1914.

Given that the passenger pigeon was a competitor of the Indians for mast (various nuts) as well as berries, and because crowds of pigeons would eat the food in their fields, it was expected that Indians would hunt them as enthusiastically as they did turkey, deer, and raccoons that also ate from their fields. Judging by the bones in archaeological sites, however, the Indians were enthusiastic hunters of everything except passenger pigeons, which leads archaeologists to think that there were not large numbers of these pigeons before Columbus. The impact of European contact altered the ecological dynamics in such a way that the passenger pigeon increased. The avian throngs that Audubon saw were out-break populations—always a symptom of an extraordinarily disrupted ecological system. Sugar Loaf Mound, above, is one of a group of mounds that were constructed by Native Americans that lived in the St. Louis area from about 600–1300 CE.

These are but a few examples. By the time Columbus arrived, the Western Hemisphere had been thoroughly touched by human hands. Agriculture occurred in as much as two-thirds of what is now the United States, with large areas of the southwest terraced and irrigated. Among the maize fields in the Midwest and Southeast, mounds by the thousands were visible. The forests of the eastern seaboard had been moved back from the coasts and were now lined with farms. Salmon nets stretched across every ocean-bound stream in the northwest. And almost everywhere there was evidence that the Indians had set fires.

South of the Rio Grande, Indians had converted the Mexican basin and Yucatan into artificial environments. Terraces and canals and stony highways lined the western face of the Andes. Raised fields and causeways covered the Beni. Agriculture reached into Argentina and central Chile. Indians had converted perhaps a quarter of the Amazon forest into farms and agricultural forests and changed the once-forested Andes to grass and brush. The Inca, worried about fuel supply, were planting tree farms.

All of this development had implications for animal populations. For example, as settlements grew so did their maize fields. Indians discouraged animals, large and small, from their fields by hunting them until they were scarce around their homes. At the same time, they tried to encourage the larger animals to grow in number further away, where they would be useful. When disease swept Indians from the land, the entire ecological regime they established collapsed.

In the early sixteenth century, Hernando de Soto’s expedition through the Southeast saw hordes of people, but apparently not bison, or he would have mentioned it. More than a century later the French explorer La Salle canoed down the Mississippi River. Where de Soto had found prosperous cities, La Salle encountered solitude without any trace of humans, but he saw bison everywhere, grazing in herds on the great prairies that then bordered the Mississippi. When Indians died, these huge creatures vastly extended their range and numbers. According to scientists, the massive, thundering herds were a pathological symptom, something the land had not seen before and is unlikely to see again.

By the beginning of the nineteenth century, the hemisphere was thick with artificial wilderness. Far from destroying a pristine wilderness, Europeans seem to have created it. The newly emptied wilderness was indeed beautiful, but it was a product of demographic calamity. 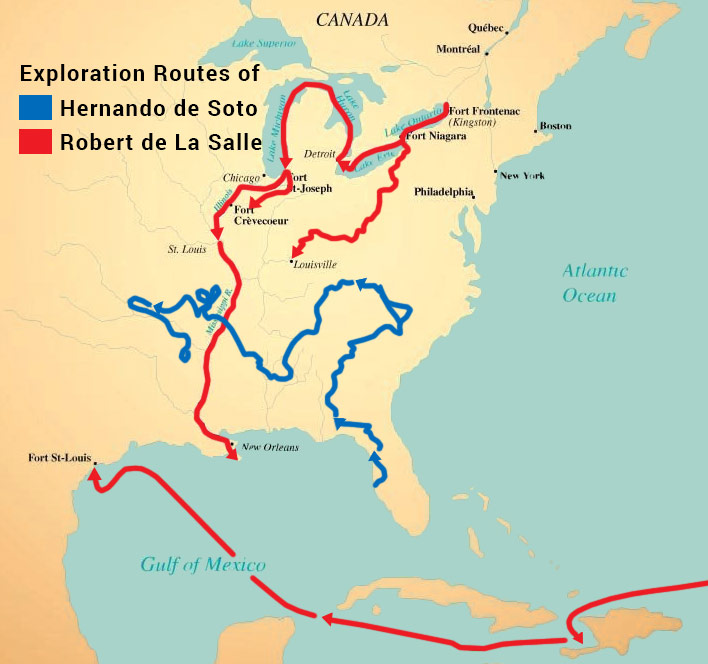 Map showing the course of the expeditions of Hernando de Soto and Robert de La Salle. Where de Soto had found prosperous cities, a century later La Salle encountered no people, only bison.

About the Book’s Author: Charles C. Mann is a correspondent for Science and The Atlantic Monthly, and has co-written four previous books including Noah’s Choice: The Future of Endangered Species and The Second Creation. A three-time National Magazine Award finalist, he has won awards from the American Bar Association, the Margaret Sanger Foundation, the American Institute of Physics, and the Alfred P. Sloan Foundation, among others. His writing was selected for The Best American Science Writing 2003 and The Best American Science and Nature Writing 2003.

Tools and the Development of Contemporary Society
1493

Against the Grain: A Deep History of the Earliest States

Gun, Germs, and Steel: The Fates of Human Societies