Journey of the Human Mind

We face a world that is far different from our ancestor’s world. But we have the potential to understand and solve the problems of today, many of which are man-made, if we first understand who we are, and how the past has made us. We must know what is unchanging about human nature, and recognize what we can and must consciously change to ensure the future for ourselves and our planet.

The Human Journey is the journey of the human mind, how it developed, the world it made and the problems it solved, why and how it solved them; and how those solutions affected its evolution and subsequent decisions.

Modern discoveries have shown that qualities that we thought were the unique provenance of our human brain in fact belong to other species as well. Rats will sacrifice food to help other rats, even strangers. Bonobos show altruism and empathy, and a sense of fairness is seen in many animals.

Religion was thought to be the birthplace of morality but morality is now understood to be an innate characteristic in us and other animals. Virtues popularly expounded as providing ‘a ticket to heaven’ are now understood as evolutionary tools through which a necessary ‘selflessness’ is cultivated – a selflessness which enables a more comprehensive understanding to stabilize in the brain. Our spiritual leaders and prophets, although often misunderstood, all spoke of this. Now our neurobiologists and evolutionary psychologists do as well.

The human brain is flexible. It has enabled us to adapt, survive, and even flourish all over the world. We are the only animals that can do this. But this flexibility has a downside: we are easily manipulated and influenced by the group or culture in which we find ourselves. We are wired to be social animals, to connect beyond our immediate circle, but we too often limit ourselves to thinking in terms of “Us and Them.”

Again, this has been pointed out by spiritual leaders, thinkers and psychologists, and most succinctly recently by the scholar Idries Shah, for example, in the book Reflections:

“Tolerance and trying to understand others, until recently a luxury, has today become a necessity. This is because: unless we can realize that we and others are generally behaving as we do because of inculcated biases over which we have no control while we imagine that they are our own opinions, we might do something which would bring about the destruction of all of us. Then we will not have any time at all to learn whether tolerance is a good or a bad thing… Most people brought up in the West cannot reproduce this drawing, because the Western brain is accustomed to translating two-dimensional drawings into three-dimensional figures and this prevents it from seeing this image as it is.

Tolerance, farsightedness, liberality and humility can now be seen as vital necessities to our survival since we are all one, interdependent humanity. The dangers of ignoring this fact puts our modern civilization in jeopardy – just as it was 3,000 years ago when the first interdependent global economy collapsed, resulting in a Dark Age of more than three centuries.

Today, we have the information that can prevent what will otherwise be a far greater collapse. We understand that because 75% of a human infant’s brain develops outside in the world, our individual worlds are molded by our families and culture, creating very different worldviews. That is one reason why individuals in different cultures have such difficulty understanding each other: even their visual systems are not the same. Nevertheless, these differences can no longer stand in the way of solving today’s worldwide problems. The Bajau community live in the ocean just off the coast of Malaysia. Bajau fishermen have been known to free dive more than 20 meters under the water while they hunt for seafood. Children spend so much time in the ocean when their eyes are developing, that they have unusually strong underwater vision. Their eye muscles have adapted to constrict the pupils more, and to change the lens shape to increase light refraction. Photo by Torben Venning. Traditional village hut in Zimbabwe. The Western world is a “carpentered world.” By contrast, some African tribes, who traditionally live in round huts with round doors, do not experience straight lines or perspective as strongly as people who live in square houses. Photo by Mark Foster.
We humans inherited much, and the most important thing we inherit is the ability to go beyond our inheritance.

Today, thanks to advances in science and technology – studies in animal and primate behavior on the one hand and in psychology and neuroscience on the other – we can reassess what it means to be human. We humans inherited much, and the most important thing we inherit is the ability to go beyond our inheritance. This is what we have done throughout our journey. We can look to our history, from our origins in Africa, to our expansion throughout the world; to the bands, tribes, city-states and civilizations we developed throughout our time on earth. We can examine the rise, development, and rationale of our institutions: religious, political, economic, ecological, educational and humanitarian.

We face a world that is far different from our ancestor’s world. But we are equipped to understand and solve the problems of today, many of which are man-made, if we first understand who we are, and how the past has made us. We must know what is unchanging about human nature, and recognize what we can and must consciously change to participate in our own evolution.

Our human journey began more than 300,000 years ago, understanding it will lead us to the next step. One that is uniquely human. 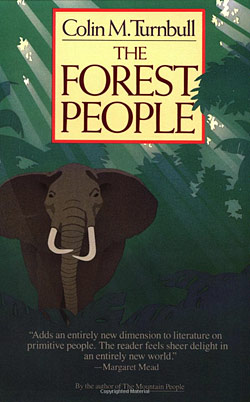 An African Mbuti pygmy leaves the dense forest for the first time: “Kenge looked over the plain and down to a herd of buffalo some miles away. He asked me what kind of insects they were, and I told him buffalo, twice as big as the forest buffalo known to him. He laughed loudly and told me not to tell him such stupid stories. … We got into the car and drove down to where the animals were grazing. He watched them getting larger and larger, and though he was as courageous as any pygmy, he moved over and sat close to me and muttered that it was witchcraft. … When he realized they were real buffalo he was no longer afraid, but what puzzled him was why they had been so small, and whether they had really been small and suddenly grown larger or whether it had been some kinds of trickery.”

A penetrating analysis of the culturally determined yet “unconscious” attitudes that mold our thought, feeling, communication and behavior. “In our shrinking globe man can ill afford cultural illiteracy.”

“One of the most effective ways to learn about oneself is by taking seriously the cultures of others. It forces you to pay attention to those details of life which differentiate them from you.” The author examines the everyday, but unspoken give-and-take of human relationships. Our “silent language” plays a vitally important role in the way we understand each other. Our sense of space or concept of time varies in different cultures and can lead to misunderstandings in business, politics and social life.

“It’s important to know that the language of space is just as different as the spoken language.”
People like to keep certain distances between themselves and other people or things. And this invisible bubble of space that constitutes each person’s “territory.” Hall looks at Japanese, French, Arab, German and English cultures to clarify one of the key dimensions of modern society. Cows, Pigs, Wars, and Witches: The Riddles of Culture

Why do Hindus worship cows? Why do Jews and Moslems refuse to eat pork? Why did so many people in post-medieval Europe believe in witches? One of America’s leading anthropologists answers these and other perplexing questions about human behavior, showing that no matter how bizarre a people’s behavior may seem, it always stems from identifiable and intelligible sources. “…lifestyles which others claimed were totally inscrutable actually had definite and readily intelligible causes. The main reason why these causes have been so long overlooked is that everyone is convinced that ‘only God knows the answer’…. We have been taught to value elaborate ‘spiritualized’ explanations of cultural phenomena more than down-to-earth material ones.”