The Milky Ocean, attributed to the “Durga Master,” ca 1780–90 CE from the Mehrangarh Museum. Vishnu lying on the cosmic waters dreaming the world into being.
IDEAS THAT SHAPED OUR MODERN WORLD: Axial Age Thought

The Hindus saw death as the passing of one’s own spirit into another new being, reincarnated in a continuous series of births, deaths and rebirths. Karma was like a physical law—what happens is a consequence of one’s own choice and behavior. An understanding grew that people are at different stages of their spiritual journey and the practices of one person might not be appropriate for another. From 330 Hindu gods, a Hindu can pick a personal deity of choice. These gods are understood metaphorically, created by humans to help them on their journey towards Brahman, the one true Reality.

Most scholars believe that during the second millennium BCE, the Sanskrit-speaking Aryans migrated gradually south from the Central Asian steppes, through the lands of modern-day Afghanistan, where they encountered the remains of the older the Indus-Sarasvati Civilization, and infiltrated the Indian subcontinent about 1500 BCE. Between 1500–1200 BCE the Rig Veda “Knowledge in Verse” was written down in an early form of Sanskrit called Vedic. This is the most prestigious portion of the Vedic Scriptures and became the text upon which Hinduism, one of the great Axial religions, was developed. It contains over a thousand songs to gods and goddesses divided into ten books. The content of these hymns includes praises, blessings, and sacrifices. Proper pronunciation of each letter is to this day given extreme importance in Rig-Veda recitation. Every sound and letter has a deep meaning attached; hence they must be properly used. It is probable that the texts were chanted at religious ceremonies and the participants transported thereby into another state of consciousness.

These sacred texts were revealed to rishis, the seers of ancient times, and as such were absolutely authoritative and divine, having been passed down orally from generation to generation through seven priestly families.

While the Rig is the oldest of the Vedas, there are three other Vedas: the Sama Veda, or the “knowledge of chants”; the Yajur Veda or “knowledge of rites”, which serves basically as a “how to make sacrifices” book; and the Athara Veda, which represents the knowledge given by the sage Athara.

The Vedas were hymns of praise and sacrifice that gave assistance to the gods who would in return ensure cosmic regeneration. They were compiled after a period of about 500 years during which time the Aryans may well have assimilated indigenous religious ideas as well. The Vedas helped shape Indian society, which basically consisted of Brahmin Priests, or Brahmin warriors, producers and servants. Both the Rig Veda and Vedic literature were influential in the development of the caste system. By about 1000 BCE the Aryans began to settle in towns, became farmers and were in contact with non-Aryan peoples. Over the next four centuries, with their numbers increasing, they began to expand into cities. Aryan traders, merchants, landlords appeared, as did money-lenders. They traded with Arabia, the empire of the Assyrians, and later with China, the Malay Peninsula and the islands of what are now Indonesia and the Philippines. By 600 BCE numerous cities had arisen in northern India – cities with fortifications, moats and ramparts to protect them from war. Along the Ganges River, sixteen different kingdoms had emerged.

This expansion of the Indo-Aryans into the Gangetic plains brought with it changes in thinking, diversity of opinions and questioning of the status quo.

As their material success increased, people began to question its ultimate value. In addition, there was rising doubt about the value of ritual that began to be associated with resentment of the Brahmin’s monopoly of religious practice. As people became less interested in religious routine and ritual sacrifice their focus changed to questions about the self and its relationship to the universe. Vedic notions were retained but adapted, reinterpreted and expanded to include Hindu changes. Between 800 – 600 BCE religious life changed as Classical Hinduism and the advent of the Axial Age arrived in India. 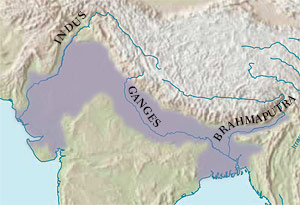 Schematic map of the Indo-Gangetic Plain

This new interest was expressed in contemplative writings called the Upanishads, a collection of as many as two hundred books written across two centuries. The Upanishads became the basis of Hinduism, serving as a summary of all of the knowledge of the Vedas as well as a commentary on them.

Some contributors to the Upanishads repeated beliefs already expressed in the Vedas, such as that every living thing has a spirit, and all spirits are able to migrate in and out of things. But now the Hindus saw death as the passing of one’s own spirit into another new being, reincarnated in a continuous series of births, deaths and rebirths – called samsara, “wandering”. Where a spirit or soul went after death depended upon how well the person had behaved in a previous life. Good actions led to a soul reincarnating to a higher form of life; bad actions led to the soul entering a lower form of life.

The concept of reincarnation is also found among some Native Americans, the Trobriand Islanders, and in West Africa. The idea was also attributed to Pythagoras, Socrates and other Axial-age philosophers of ancient Greece – descendants of the
Indo-Europeans. Adi Sankara – The great Advaita philosopher and commentator on the Upanishads.

The idea of Karma contributed to the ethicizing of rebirth. Karma was like a physical law, and even the gods were subjected to it. One’s moral deeds determine one’s status at reincarnation, which meant that every individual inexorably gets what he or she deserves. The Upanishads teach that what a man turns out to be depends on how he acts and conducts himself. What happens to one is a consequence of one’s own choice and behavior, and one’s present condition reflects previous acts in previous reincarnations.

Human birth is precious because as humans we have the unique opportunity to affect our existence through conscious choice. But, to be reborn as a God or a Brahmin is rare and requires a great deal of Karmic merit.

The power of sacred ritual action (Brahmin) as a way to be in touch with the sacred worlds no longer sufficed. Now sages wanted to know the true nature of Brahman, the deep reality that was the basis of religious practice and the very foundation of life.

The Axial sages thought this knowledge would confer liberation. In the Upanishads they sought the nature of ultimate reality and questioned the true nature of the self. They were seeking something immortal, redefining the pre-Axial term for breath “Atman” to mean something equivalent to “soul” that does not die when the body dies, but has always existed. They claimed that confusing the distinction between the lower senses of body and mind etc. and Atman, the higher self, brings anguish and suffering to the human being.

By the mid-Axial age Atman and Brahman had converged and the sages concluded that the soul is identical with ultimate reality itself. Maya, the veil over reality that deceives us into thinking and acting in self-centered ways, separates us from Brahman and Atman and traps us in samsara.

The main problem of the Hindu Axial Age was how to attain Moksha – the complete release from the clutches of continuous birth and death, the end of reincarnation. In search of this men and women of all castes were moved en masse to give up everything – renunciation was seen as the only hope for a life of freedom and fulfillment. Known as Samanas, there were so many of them that they were regarded as a fifth caste. These ascetics and sages lived alone in caves or forests, or with their families in communities supported by those who felt unable to search for Moksha in this way. A statue of Shiva in yogic meditation.

As the Hindu religion evolved through the Axial period an understanding grew that people are at different stages of their spiritual journey and that the practices of one person might not be appropriate for another. So the worship of deities continued alongside the search for Brahman. Hindu gods with multiple arms or heads, some blue or elephant-like are simultaneously human and not human. Their function is to remind Hindus that Brahman transcends the human capacity of thought and experience, and to point beyond the human-made image towards ultimate reality.

These deities are manifestations of Brahman and conduits to Brahman.

There are 330 Hindu Gods, and a Hindu can pick his or her Ista-Devata – personal deity of choice. These images, to this day, help devotees by allowing them to feel close to divine reality and to feel that it is concerned about them. During festivals, such as Darsan, images of deities are fed, dressed and honored, and finally at the end of the festival, destroyed, in recognition of the fact that Reality is beyond the image. The images are mere metaphors created by humans to help them on their journey towards Brahman, the one true Reality.