The Neolithic site of Mehrgarh is located to the west of the Indus-Sarasvati flood plain, in Baluchistan east of the mountain city of Quetta in Pakistan. 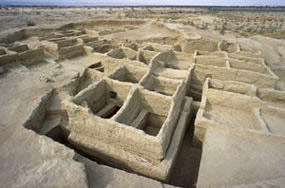 Mehrgarh is situated at the foot of the Bolan Pass, one of the major communication routes between the Iranian Plateau, Central Asia and the Indus Valley. According to the lead excavator, the French archaeologist Jean-François Jarrige, “The site covers an area of about 500 acres [200 hectares] with only pre-Harappan remains” and shows “evidence of continuous occupation for more than three millennia prior to the Harappan civilization.”

Nine thousand years ago this was a small farming village consisting of hunters, farmers and herders. Excavated in the 1970s, the French team in collaboration with the Department of Archaeology of Pakistan, found houses of mud brick, some with external walls painted and all built in a similar rectangular design, grouped together, sharing walls and oriented north-south and east-west. There is no sign of doorways so it appears that, in common with Çatalhüyük and Neolithic sites of the Fertile Crescent, entrances and exists must have been through rooftops; there is no evidence of what these roofs were made of, however.

The team also excavated about 360 tombs in Mehrgarh where the dead, sometimes buried with tarred baskets at their feet, had funerary effects including not only utilitarian objects, but also skillfully crafted ornaments. These ornaments used materials such as seashells, lapis lazuli, and turquoise that would have had to have been brought in from quite a long distance.

Barley and wheat remains at the site, plus an uncovered part of a room or a yard with two intact storage jars surrounded by several grinding stones and pestles, lead archeologists to conclude that people were dependent on the cultivation of these grains. They may well have substituted hunted meat such as gazelle and wild sheep, with the meat of domesticated goats and Indian zebu (Bos indicus) which became more common than its wild counterpart. By approximately 5000 BCE simple farming and hunting had been superseded by cattle, sheep and goat herding. Around 4300 BCE small-scale agricultural settlements began to proliferate. From Kandahar in Afghanistan, to Baluchistan in Pakistan, we see widespread, well-organized sites like Mehrgarh cultivating barley and wheat, and engaging in cattle domestication and craft production. The pottery being produced, called Togau, shows a similarity of signs and motifs across the region and beyond, as far as Iran and Turkmenistan. The style was characterized by geometric shapes and stylized animal figures; one particular characteristic is a band of hooks or ‘S’ shapes, one after another, that look something like wavy grass.

Togau phase pottery shard illustration, showing band of ‘hooks’ or ‘S’ shapes.
By about 4000 BCE we begin to see early signs of urbanization. Earliest examples are Kot Diji in the Rohri Hills of Khairpur province in Pakistan, and Rehman Dheri on the west bank of the Indus River in the Khyber-Pakhtunkhwa Province. The latter grew from a farming settlement to become home to over 10,000 people, showing clear signs of the urban planning typically found from then on. The city was built inside large walls—which would have protected against both floods and people. Spacious streets were laid out on a grid, oriented from north to south and east to west dividing settlements into blocks further sub-divided by lanes that provided access to homes. The site was situated on a rectangular mound covering about 55 acres.

Very little is known about the agricultural methods of farmers who supported these cities. Some of them undoubtedly made use of the fertile alluvial soil from the various rivers flooding, but scholars don’t think this would have produced enough food to support the larger city populations. There’s no evidence of irrigation, but this may well have been completely destroyed.

Rehman Dheri on the west bank of the Indus River in the Khyber-Pakhtunkhwa Province … grew from a farming settlement to become home to over 10,000 people.

Keep in mind that throughout Asia to this day, generations of rice farmers produce significant agricultural surpluses from terraced, hillside rice paddies. Relying on monsoon weather patterns in which the bulk of a year’s rainfall occurs in a four-month period, the Indus-Sarasvati people may well have had similar farmlands and they certainly harvested rainfall: archeologists have excavated massive reservoirs hewn from solid rock that were designed to do so.

About this same time we see the beginning of the migratory push eastward from across the Indus River and into the Indus-Sarasvati plains, and a new form of pottery begins to emerge known as Hakra ware.  Mehrgarh remained continuously occupied until 2600–2000 BCE – about 5,000 years, after which it seems to have been abandoned, the inhabitants most likely also migrating to the fertile plains as Baluchistan became more arid, some likely joining those already settled at Harappa and Mohenjo-Daro. Mehrgarh, Hakra Ware approximately 3300 BCE.
Each site appears to have had a controlled water supply and elaborate drainage system with reservoirs for rainfall collection and storage, as well as sewage and waste systems.

While many areas saw continuous occupation and growth, the five major regional urban centers which have been identified to date from the civilization’s mature phase are: Harappa and Mohenjo-Daro both on the banks of the Indus, Ganweriwala and Rakhigarhi in the area where the Sarasvati once flowed, and Dholavira in the Indian state of Gujarat. Again, the quality and similarity of municipal town planning indicates that these communities had some method of coordinated administration, but we have no idea what form this took. Their streets were laid out like modern towns, all on a similar rectangular grid pattern. Mud bricks were used to build houses on either side of streets, usually on a stone foundation. Although some houses were larger than others, Indus-Sarasvati cities do not show the kind of massive gulf between wealthy and poor dwellings that is found in other ancient civilizations.

Each site appears to have had a controlled water supply and elaborate drainage system with reservoirs for rainfall collection and storage, as well as sewage and waste systems; homes had access to water, many had baths, with drains leading into underground sewers or septic jars, some of which had inspection holes for maintenance. We are left with the impression of a society where even the poor had a decent standard of living – though of course there may have been more fragile facilities for the less fortunate of which there is now no trace. Public baths have also been found, such as the now famous one at Mohenjo-Daro.

One of the Largest Civilizations of the Ancient World 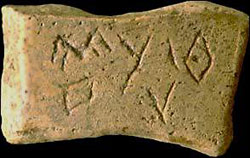 Treatment was carried out in an area of what is now Pakistan, using tiny, flint-tipped wooden drills, that rotated at about 20 times a second.